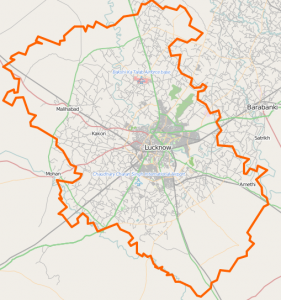 is the capital city of Uttar Pradesh, the most populous state of India. Lucknow had a population of 3,647,834 in 2001.The expected population of Lucknow in 2009 is more than 50 lakhs. Lucknow is a second largest city after Delhi within the states of north,central and eastern India. Lucknow is also the administrative headquarters of Lucknow District and Lucknow Division. According to Government of India, the Lucknow district is one of the ninety Minority Concentrated Districts in India, shown by 2001 census data on population, socio-economic indicators and basic amenities indicators.

Located in what was historically known as the Awadh region, Lucknow has always been a multicultural city. Courtly manners, beautiful gardens, poetry, music, and fine cuisine patronized by the Persian-loving Shia Nawabs of the city are well known amongst Indians and students of South Asian culture and history. Lucknow is popularly known as the The City of Nawabs. It is also known as the Golden City of the East, Shiraz-i-Hind and The Constantinople of India.

Today, Lucknow is a vibrant city that is witnessing an economic boom and is among the top ten fastest growing non-major-metropolitan cities of India. It is the second largest city in Uttar Pradesh state. The unique combination of its cultured grace and newly acquired pace is its most promising feature that augurs well for the future.

Lucknow – The upcoming METRO is a hallmark of cultural extravaganza, known all over the world for its many splendours. A city that has a magical charm, a charm that’s forever and a charm that’s apart. Be it the cultural charm or the monumental one, all are well conserved here to make Lucknow ” The city of many splendours”.

Walking through the lanes and by-lanes of Chowk and Aminabad one finds Lucknow of yore. The ‘tehzib’ or mannerism is still prominent and a topic of great appreciation. This is a city that still speaks the language of “aap-janab” and the dictum of “pehle aap” is still a part of everyday life for a true Lakhnawi. – and so natural it is – Aadab or salutation which has its own sophistication and style. Dress forms though have changed noticeably in the span of a century, yet the beauty and charisma of Chikan – the intricate and delicate hand embroidery, still rules the wardrobe. Lucknow is in fact among a few cities that duly understands the grace of the ‘dupattas’ or the covering cloth. Wisdom, women and wine are the three things truly understood and respected by the Nawabs. Not a thing of condemnation but an institution it was the “kothas”, where sons of Nawabs were deliberately sent to learn the culture, sophistication and respect for the fairer sex. Muzzafar Ali’s unforgettable film “Umrao Jaan” is a depiction of this social institution. Love was found in either Paris or Lucknow– a proof of this is the lovers lane in the posh modern Hazratganj: these lanes were used as a meeting place for the lonely hearts to escape the monitoring eyes of their parents.

“Kan kauwe bazi” or kite flying was not only a pastime but the means of sending love letters to the beloved, “kal shaam kothe pe aana, hum intezaar kareinge tumhara”– Tomorrow in the evening come to the terrace, I’ll wait for you. Such words were written on the patang or the kite and the kite was flown and dropped on the beloved’s terrace. A story goes that once a Chhote Nawab did this with his beloved and instead of the beloved getting the letter her mother found it and the love bug bit her, assuming that the Bade Nawab has done this sweet and naughty thing, she reciprocated in the same manner writing “Intezaar tumhara hi to tha humein, umra bhar rahein takte rahe, der lagee aane mein tumko, shukr hai phir bhi aaye to”– I was waiting for this all my life, you came late yet now you have come. Thus started the love between the Bade Nawab and the Badi Begum which ended up in their marriage and left the real ones to repent.

Today in Lucknow many things may have impurities but preparations like those of Tunde-ke-kabab, Rahim-ke-kulche nihari, Kababs at Akbari Gate, Ram Asrey ki malai aur lal peda, Raja-ki-thandai, Parathas naans aur sheermals ya Sharma-ki-chaat have held their heads high due to purity and standards maintained. Good eateries in Lucknow are often found in the serpentine lanes of old Lucknow. So many of you would have been born in Lucknow like me, but will agree that each day is distinct. The shades of the monuments differ with each sun and moon. You discover and rediscover Lucknow everyday. No one has known Lucknow to the full and will never. That is why : “Jisey Aap Kehte Hain Lucknow – Usey Hum Kehte Hain Duja Jahan” (The place that you call Lucknow – we call the other world)