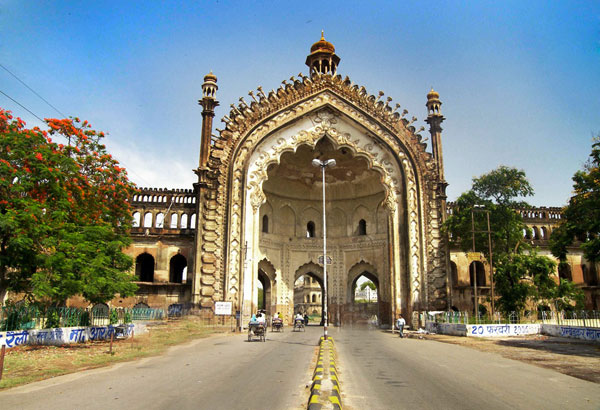 The Rumi Darwaza (Hindi: रूमी दरवाज़ा  and sometimes known as the Turkish Gate), in Lucknow, Uttar Pradesh, India, is an imposing gateway which was built under the patronage of Nawab Asaf-Ud-dowlah in 1784. It is an example of Awadhi architecture. Being an entrance to the city of Lucknow, Russell, the reporter of The New York Times who accompanied the victorious British army that entered Lucknow in 1858, after India’s First War of Independence, had called the stretch of road from Rumi Darwaza to Chattar Manzil the most beautiful and spectacular cityscape that he had ever seen, better than Rome, Paris, London and Constantinople. The Rumi Darwaza, which stands sixty feet tall, was modeled (1784) after the Sublime Porte (Bab-iHümayun) in Istanbul.

It is adjacent to the Asafi Imambara in Lucknow and has become a logo for the city of Lucknow. It used to mark the entrance to Old Lucknow City, but as the City of Nawabs grew and expanded, it was later used as an entrance to a palace which was later demolished by the British insurgents.